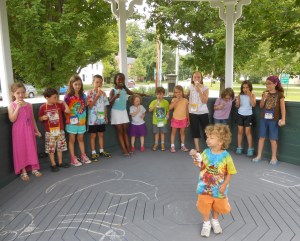 But last week the kids in Hancock taught me a new game called Sweet and Sour. It is one of those absolutely simple, near perfect forms of entertainment.  The kids grouped themselves by the bandstand and waved at passing cars. Some offered exuberant, jumping-up-and-down waves; others chaste little twists of the wrist, beauty pageant style. But every wave was accompanied by an ear-to-ear grin. The object of the game? To get people passing by to wave back. If people waved, the kids would shout “Sweet.”  Those who ignored the joyful ruckus were tagged as “Sour.”

There were many sweet things about last week. We held Vacation Bible School at the Church, always one of my favorite weeks of the year. We acted out The Good Samaritan story with Oscar-worthy skill. We talked about what it means to be a neighbor. We danced. We strung beads. We picked through an old stamp collection for the best dog and skiing stamps. We folded paper boats (the extent of my paltry skills in origami). We decided that if we had to live somewhere else, we would pick Zimbabwe because it is such a fun word to say.We rebuilt a model volcano that melted in the heat. We politely tried spring rolls and guacamole, but agreed that  ice cream is better. We talked more about what it means to be a neighbor.

It was a sweet week for me and I think for the two dozen children who came to VBS. But it turned out to be a sour week for American children in general. A week reminding us that our children are not safe when fear and actions justified by fear become the highest law.

After VBS, as I was sorting out the beach towels and water bottles and hoodies left behind in the Vestry, I wished with all my heart that another family could have been handed back a hoody stained with ice cream instead of blood.  I wished that life could have been sweet and long for Trayvon Martin. I wished that our country had not succumbed again to the sour sins of racism and fear.

Today our President reminded us that “the African-American community is looking at this issue through a set of experiences and a history that doesn’t go away.” In New Hampshire, the third whitest state in the U.S. with a white population of 96% (and a state that borders numbers one and two–Maine at 96.9%, Vermont at 96.7%), we have to work harder to make those connections. We may not have black friends or colleagues.We may not understand why the events of the past week stir up such deep and painful memories.

If you haven’t read it, try and find a book called The Warmth of Other Suns by Isabel Wilkerson. It is, hands down, the best work of non-fiction I have ever read. It tells the story of how the Jim Crow laws and their accompanying attitudes shaped the lives of three black Americans who came north during the 20th century. When I was reading it, I kept saying over and over again, “I had no idea. I just had no idea.”

We may be clueless and awkward around the subject of race, but we know what the Gospel demands. That we keep working at being a better neighbors. Until sweet trumps sour, once and for all.

I think the magic age is fifty. That’s when the AARP sends you your first dummy membership card and an invitation to join. 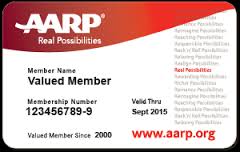 If you happen to have teenagers living under your roof at the time, this can become the source of unlimited family fun. Let the derision games begin. Your teenage son, for instance, may take to calling his father “Gramps” or he may helpfully and loudly remind you in a checkout line that you should  “whip out your granny card” and see if there’s a discount.  In a calm voice, wise with experience and years, you tell him that since grannys do not need expensive size 13 basketball shoes, he can put the pair he’s holding back on the shelf. Score: Aged Mother 1, Callow Youth 0.

At the AARP card’s first dawning, so impossibly early, it’s easy to make a little crossover move in your head and convince yourself that there must have been a computer glitch. A bit of erroneous code that attached itself to your name in a batch of marketing data. You may even chuckle, as you toss the mailing into the recycle bin.

But denial has a limited run. My age came home to me not long ago when I discovered (via Facebook, how else?) that a boy I knew in high school is now head of the AARP in my home state.  I haven’t seen him in 4o years, but we were once members of a high school debate team, coached by an extraordinary teacher named Freeman Frank. Yes, the debate team was nerdy (according to the nerd/geek scale my favorite librarian touts). But I remain grateful to our now deceased coach who was both a brilliant speaker and a remarkable teacher of oratory. He called himself one of the last Abolitionists, (because he believed the work of ending racism had barely begun) and he spoke with an Abolitionist’s passion. More Sundays mornings than not, I think of him when I stand up to preach. And it wouldn’t surprise me if the boy I knew in high school also thinks of him when he stands up to speak on behalf of older Americans.

Once you get over the shock of having arrived there, older age is not a bad place to be. All in all, our faith tradition deals with aging rather generously. Older people in the Bible get to travel  (Moses), laugh (Sarah) and bless (Simeon).

Standing in the Christian tradition, but speaking to even wider audience, Joan Chittister writes thoughtfully about aging in her book The Gift of Years–a book everyone ought to read when the first AARP card arrives and continue to reread over the decades to follow. My copy is underlined to a fare-thee-well,  making it hard to pull a single quote, but here’s a sampling of Chittister’s wisdom: