A Second Look at Nostalgia

I live in a rural town where maple syrup production is a livelihood for some and a serious hobby for others. A highlight of town meeting every March is when one of our local producers stands up and reports on the sugar content of the current year’s run. But this is only November, and we have a long New Hampshire winter to see ourselves through before the sap begins to run again.

This time of year, it’s a different kind of sap that flows. The sap of nostalgia. Thanksgiving is the season opener and we will be sticky into it from now until Christmas. I don’t know how it went for your family yesterday, but ours was a Thanksgiving laced with nostalgia. Maybe e 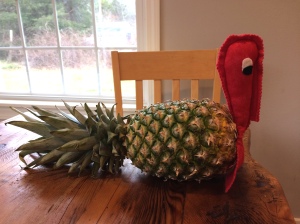 ven more so than usual. We seemed, by instinct, to take extra pains with it this year. Perhaps it was the balm that made it possible for a politically divided family to gather in gratitude and peace. We shared a table with cousins we haven’t spent Thanksgiving with in many years. My sister found the red felt turkey head and pinned it to a pineapple, resurrecting a church fair-inspired centerpiece from our childhood. My mother came bearing her grandchildren’s favorite childhood sweets. She no longer drives, but has figured out how to order half-dipped mints and fruit slices on-line. She could probably find them in other venues, but we are charmed that she continues to get them from the seaside candy shop where she and her sisters purchased their own childhood treats in the 1930s.

But nostalgia does not always leverage the good and the sweet. The word itself was first coined in the 17th century to describe the debilitating homesickness of young Swiss mercenaries. Nostalgia can be tricky and take us to dangerous places. Sometimes it can paralyze us. In a recent blog post, one of my UCC colleagues described nostalgia as a response to “the narrative of decline.” Congregations and clergy alike can fall prey to a nostalgic and enervating sadness in the face of reminders of the more numerically robust days in our churches’ past.

But I’m not ready to give up on nostalgia altogether. Research coming out of the University of Southampton in the UK is illuminating. Although nostalgia is often triggered in times of sadness or loneliness, it can generate narratives of redemption. Constantine Sedikides and his colleagues are demonstrating that although regarded throughout centuries as a psychological ailment, nostalgia is now emerging as a fundamental human strength…It generates positive affect, elevates self-esteem, fosters social connectedness, and alleviates existential threat.

In difficult seasons in my own life, a dose of nostalgia has helped me find my footing again. During the ordeal of my stem cell transplant, I came into a cache of my father’s old Kodachrome slides. As I struggled to regain the strength to do even the most basic tasks of daily living, 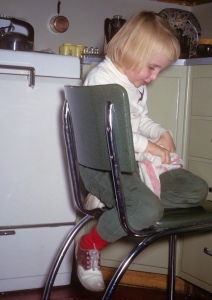 I was surprised by how much encouragement I drew from the photographs my father had taken of me doing those tasks for the first time. I would look at a picture of that little girl drying dishes and tell myself to be that girl again, the one in scuffed saddle shoes so fiercely determined to do the job well. Nostalgia helped me recover a sense of the person I had been in a time when every accomplishment brought joy, even the simplest of victories, like learning to use a dishtowel. My father’s old slides and the wave of nostalgia they triggered helped me to rediscover that “I can do it myself” toddler within, a person I very much needed to connect with in order to recover.

Maybe it’s a good thing that we give the end of every calendar year over to a season of nostalgia. As Christmas arrives, the most memory-laden of our holidays, it is inevitable that some sadness will collect. There are people and things we miss and that we will always miss. But there is also strength and resilience in those memories.  My hope is that this seasonal flow of nostalgia will help us connect once again with our sweetest and strongest selves.

One response to “A Second Look at Nostalgia”